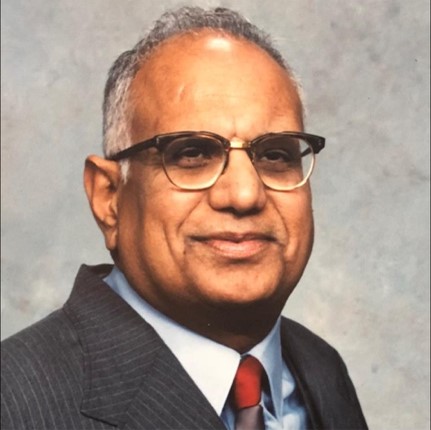 Dr. Bharadwaj was born on May 20th, 1931, in Gorakhpur, Uttar Pradesh, India and married on February 14, 1949.  A lifelong academician, Dr. Bharadwaj was very dedicated to furthering science, education, and religion.  He earned a Bachelor of Science from NREC College Khurja (Agra University) with merit in 1950 and then a Master of Science in Physics with 1st Division and 1st Position from Agra College, Agra (Agra University) in 1952. He then joined B.R. College Agra as an assistant professor of physics, where he remained for two years before working for another two as a physics lecturer at GPIC Tehri Garhwal. Dr. Bharadwaj transferred to Government College Meerut, where he served as a lecturer in physics for three years. He then returned to B.R. College Agra as an assistant professor of physics for one year.

Dr. Bharadwaj came to the United States in 1960 as a graduate assistant in the Physics Department at SUNY Buffalo.  He was appointed as Assistant Professor of Physics at Niagara University in 1962.  His Ph.D. was confirmed in 1964, when he was promoted to the position of Associate Professor of Physics.

In 1966 he was promoted to the position of Professor of Physics and continued working in that role until 2007. He served as Chairman of the Physics Department for 10 years, from 1976 to 1986.  He retired from Niagara University in 2007 after 45 years of educating countless students. Dr. Bharadwaj was a devout Hindu and a very strong Sai Baba devotee and spent many hours at temples and religious gatherings.  Dr. Bharadwaj co-founded the Hindi Samaj of Greater Buffalo in 1986 and the India Association of Buffalo in 1961 and was honored by it in 1997.

In lieu of flowers, donations to Niagara University’s scholarship fund can be offered on behalf of Dr. Prem Datta Bharadwaj at: